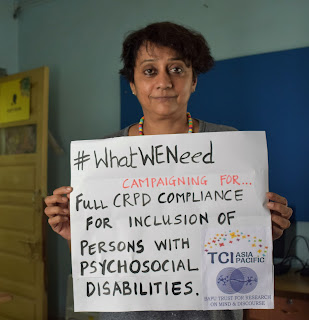 Basic and advanced math, probability and predictions, game and set theory, logic, etc. are used to a lesser or greater degree by most of us in our daily lives.  Citizens of the world who are using mathematics, do not set up a worldwide protest when mathematicians do not invite us to their conferences.  This is true of physics, microbiology, ion chemistry, astronomy, sociology, history, geography, anthropology and various other “professional” conferences that happen worldwide. We do not do this even for gynecology, urology, cardiology, or neuroscience conferences.
So, why do persons with psychosocial disabilities, and users and survivors of psychiatry, do it when psychiatrists or psychologists set up their “business as usual” conferences and present academic papers? Why is participation important here, in a way that is not important in those other spaces.  Does this mean that psychiatrists, psychologists, psychoanalysts, and other mental health professionals, or students for that matter, can never organize a conference or a curricula or a dissertation topic without having dozens of us dissenters participating and having “our voices” heard?
For one thing, it is an old habit, our resistance to the ‘psy’ disciplines. ‘They’ can never do right by us! Our movement(s) is built upon a 80 to 100 year old resistance to the development of the ‘psy’ disciplines and their classic institutional designs for “ships of fools”. The “ex-patients’ liberation movement”, works of memorable leaders such as Leonard Roy Frank, who I had the privilege of meeting; Kate Millet, David Cooper, Simone de Beauvoir, Sylvia Plath, and many other white men and women who “escaped” from mental health care by their resistance, their writings, poetry, “mad art”, writings created a vibrant experiential archive of madness. The Mad Pride movement was born (absent, a “Chemistry Pride” or a “Physics Pride” movement, etc.) and dissent was expressed through street tabloids, “Dendron”, “Madness Network Newsletter”, etc. in the post war reconstruction period.Just as contemporary dissenters challenge occupation by the West in the name of peace building, activists from the west, including the US, Europe and the West,  at the time followed inspiring state dissenters such as Franz Fanon, Cesaire Aime, and others, who steadily challenged colonialism, the worldwide apartheid, wars for race supremacy, vanquishing of indigenous populations, trampling over land and water, and oh, all that violence.

The works of Judi Chamberlin, Sylvia Caras, Mary O’Hagan, Iris Hoelling, Chris Hansen, David Oaks, and dozens of others are considered inspirational living legacies. David Oaks, who I met in Oregon a couple of decades ago, prophetically spoke about an “Emergency” coming to the “developing” world.   More contemporary activists such as Gabor Gombos, Rufus May, Olga Runciman, Yana Jacobs, and organizations like NEC, “Support Coalition International”, (which later became “Mind Freedom International”), carried the baton of resistance in the highly institutionalized west through the ’80s and the ’90s. Over the decades, the Mad Pride, now called the “user survivor movement” had the support of several allies such as Jean Paul Satre, Ronald Laing, Dan Fisher, Thomas Szasz, Peter Breggin, Philip Thomas, Peter Stastny and a number of others, who exposed the underbelly of psychiatry, and its institutions. Szasz, a psychiatrist by profession, wrote his memorable book, “The myth of mental illness” debunking the idea that problems of living are actually diseases.  Also add the legacy of “alternatives” to psychiatry, a driftwood stream of psychiatry with transformed practices that continue till today, including Soteria Network, Orthomolecular Psychiatry (which is now Integrative psychiatry), INTAR, etc.

The World Network of Users and Survivors of Psychiatry (WNUSP) was formed in 2002, thereabouts, drawing from the legacies of people like Mary OHagan, Iris Hoelling and Chris Hansen. This was around the time when the UN was gearing up for drafting the Convention of the Rights of Persons with Disabilities. The WNUSP brought liberation to us worldwide, by ensuring a great drafting on legal capacity, liberty, and integrity. However the WNUSP was more active in the global north, not engaging with the global south, except in a minimalist way. It had no presence in low and middle income country regions, or, for that matter, in the non-white world of the west.
The movement continued to be white, north country, through these years, a point of embarrassment today,  in (nearly all) post colonial countries, as people of colour in low and middle income countries, and in the high income countries, have set up their own counter to what is experienced as the “dominant western white voice” within a diverse set of discourses of “mad” resistance. See NSUN, USP Kenya, TCI Asia Pacific as examples.

It can be said that the movement(s) of persons with psychosocial disabilities, users and survivors of psychiatry, mad people and all colonial and post colonial identities thereof, has had a history as long as the birth of the ‘psy’ disciplines. The movement is there, challenging these disciplines, and not others, because of the strength of marginalized identities and experience of violence, trauma and torture by the so called ‘psy’ sciences, including the lock up, seclusion, restraints, use of hazardous neuroleptics and narco analysers, insulin coma, shock treatment, implants, tasers, tranquilizers, benzos, and other addictive hazardous substances.  Mathematicians and other disciplinary people, thankfully, do not perpetrate this, nor is violence, trauma and torture, central to the very practice of mathematics, chemistry and the other sciences.  To be freed of involuntary commitment was considered as a “long term goal” of the movement.

Secondly, and importantly, “they” never change!! Having been a student of the philosophies of natural and social sciences, there were some basic principles that we expect from an aspiring science: That it goes beyond an “aspiration” to be a science!! This never happened to psychiatry. We were taught that when an experimental result belies the hypothesis, there will be a course correction, and there will be accumulating new “truths” based on the falsifiability of claims (Karl Popper and followers). Also that when a whole set of claims have reached beyond the realm of falsifiability, reason and objectivity, then there will be a “paradigm shift” (Thomas Kuhn and followers). For example, some theories, such as that the earth is the center of the universe, just get trashed. “Science” precluded non-falsifiable theories and science progressed by paradigm shifts.

Well, there are millions of people who experience distress, disturbance, and disabilities, psychosocially, on the planet today. However, the ‘psy’ disciplines have not helped a lot, have caused grievous harm, having gone beyond the point of reason, objectivity and falsifiability, not making a paradigm shift, assuming a god like universality. Traditional philosophers of science would call such endeavours as tautological belief systems, faith and rhetoric, and not science. Any science is so because it is falsifiable, and can be dropped if not worthy of reason.

For example, where drugs fail, there is now the “drug resisting” mental disorder. When there is apparent drug withdrawal effects found in whole populations, it is the illness not the medicines. Where all interventions fail, there is total “loss of insight” needing forced commitment. There is no falsifiability conditions when medication does not cause harm, nor when institutionalisation will fail (In our experience in the movement, there are trillion instances when institutionalisation has failed, to the point of leading to death). There is no condition set, of proof of evidence and verification, that taking consent away  favours outcomes of inclusion. A “disease” which has no bug or germ, a blood pathology or other such physical markers, however small, is unfalsifiable, its truth claims are made on a statistical cloud castle, and it is not a science. [This however does not mean that there is no personal distress, disturbance or disability.] A number of critical philosophers, including Adolf Grunbaum, Felix Guattari, Andrew Scull, Nikolas Rose,  and others have addressed the emptiness of claims of the ‘psy’ disciplines to science, and its historical, capitalistic, underpinnings.

The point is, that the ‘psy’ disciplines, particularly, psychiatry, never undertook course correction. It never defined what are its credentials, proof of concept and verification. There were hundreds of opportunities to do so through its history and development. Now, with the CRPD, there is ample opportunity to go beyond course correction and harm reduction and effect a “paradigm shift”. From the point of science, and from that of values, this is necessary. By this time, the critique of psychiatry comes at its highest pitch, from within, cf. the Special Rapporteur’s report. Dr. Puras is a child psychiatrist, disgusted by the recalcitrance of globalizing psychiatry, without course correction. Allen Frances, who is a lead author of the DSM classics, has disowned the enterprise. There are dozens of other psychiatrists who have quit the field, after failing to bring the professional lobbies to notice some fault lines in the basic tenets of their discipline and its practices.
It is really important, despite lack of movements in the other natural and social sciences, that we continue the struggles. No other ‘science’ has let down humanity like psychiatry, its medicines and its institutions, have. It is not about ‘degree’ but about ‘scale’. The harm caused is not about being ‘a little less’ or ‘a little more’, but is at a different level altogether, as the UN CRPD monitoring committee has taken the pains to elaborate country after country. With the Lancet paper, psychiatry is moving to another ‘scale’ without valid epistemological foundations which goes beyond ‘harm’. When hazards strike whole populations, society has usually found stronger words for naming such phenomena.
We look forward to Rapid Responses to the Lancet paper at #WhatWENeed